Laws of physics are universal. They help you to understand why everything around us follows a pattern. In this article let’s make an attempt to understand how things move? What makes them stop? Why do the rest? What governs all of these?

Imagine you are sitting on a cozy sofa, watching your favorite movie on a lazy Sunday, and your mother calls you and asks you to shop for groceries. You can imagine how difficult it is for you to get up and do the work. Now, assume you are practicing for a 100-meter race on the track and somebody asks you to stop immediately within a second? Will you be able to do it? What if you are asked to turn towards right? Will you be able to turn immediately? The answer to both the question would be “NO”. You can stop, Yes but gradually. You can also turn but not sharply! And guess what? Basically, it’s the same story with every object.

In simpler words, it means, Object continues to do what they are doing unless some external unbalanced force acts on them. Follow the chart given below for a simple visualization. 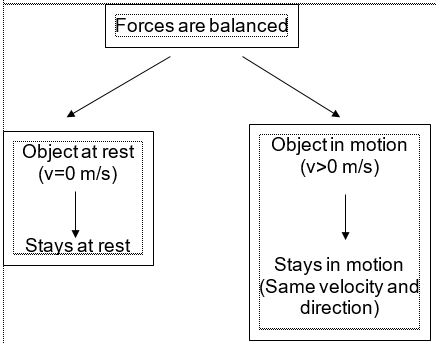 This tendency of an object to resist change in its state of motion is called Inertia. Thus, Newton’s first law of motion is also called as Law of Inertia.

Do you think all objects have the same inertia? All objects resist changes to the state of motion, right? So, all object should offer the same inertia correct? Well, Not really! Because Inertia tells us How strong an object’s tendency is to resist change in its state of motion. For simple understanding purpose, imagine there is a small brick kept on the table, another relatively larger and heavier brick is kept next to small brick, which one you think would be easier to push? Without a doubt, it is tiny brick correct? Yes, why is that? Because Heavier brick has the tendency to resist motion more. The heavier the object… The more is its tendency to resist the change in motion. More mass an object has, Greater will be its inertia. So, if we apply equal force to both these bricks, the tiny brick will move further as compared to the larger brick. The heavier brick has more inertia.

How can we relate Inertia and mass? Inertia is the tendency of an object to resist changes to its state of motion and Mass is the measure of its inertia.

Let’s say there are two objects on the table. One has a mass of 5 kg and another has a mass of 10 kg. Say, if you apply a Net Force of 10 units to each of them. Which one do you think will accelerate more? Surely, it’s the one 5kg one, because it has less mass. Lesser the mass more is the acceleration. More is the mass, less is the acceleration. Hence, we can say acceleration depends inversely on the object’s mass. If you understand this concept, then understanding the Second law will be very easy.

It is popularly written in the form F_{net}=ma

Derivation of physics formulas is crucial to understand the subject with good depth. The above-mentioned formula F=ma can be derived easily. The force(F) acting on the body is directly proportional to change in its velocity, assuming its mass(m) to be constant. Thus, we can write

Where vf is the final velocity and vi is the initial velocity.

We know that change in velocity with respect to time is acceleration. Thus,

On removing proportionality symbol we get-

Thus we arrive at F=ma

Now you know what force an object can carry.

To conclude, now we have understood how laws of physics play behind every motion. Click the link below for interactive video lecture on laws of motion.